Onderzoeksrapportage: Cooling of a hot smoke layer by a sprinkler spray 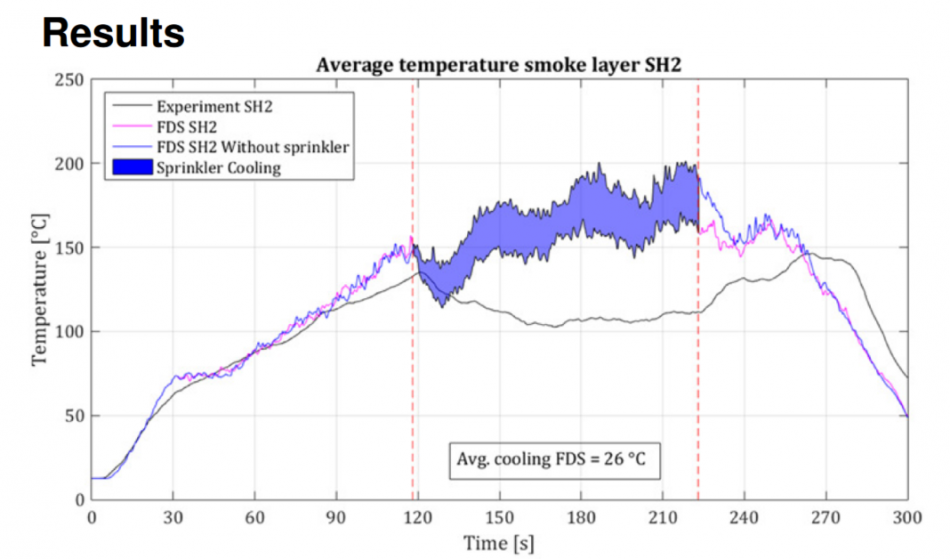 Smoke layer cooling caused by a sprinkler water spray has been studied both experimental and numerical. Only the influence of the sprinkler spray on de smoke layer is studied, the fire is not affected by the sprinkler spray. Heptane pool fires of different sizes are used to obtain a stable smoke layer. The smoke is extracted mechanically by a fan and the dry gases are analysed. From oxygen and carbon dioxide concentrations the oxygen depletion is calculated. This is used to determine the fire’s Heat Release Rate (HRR). Furthermore, temperatures of the smoke layer are measured throughout the smoke cabinet. In the centre of the smoke cabinet a sprinkler nozzle is located at a height of 2.9m. A commonly applied pendent sprinkler with a K-factor of 80.6 is activated manually after a stable smoke layer is formed. Different operating pressures were applied to study the cooling effect of an increased water flow rate.

Numerical simulation of a CFD-model is done with Fire Dynamics Simulator (FDS), developed by NIST. The measured HRR is applied in the models for simulating the pool fires. The sprinkler spray pattern that is implemented in the models, is based on the water distribution during bucket tests that have been performed. A spray pattern divides the spherical spray injection surface into more than 300 parts with each different directions and unique water mass fractions.